‘The world is about to change once again’

LOWELL » Nick Grewal sees flying cars on the horizon. Imagine an autonomous taxi that could jet you from Boston Common to Central Park in 45 minutes. That may be the reality within the next five years, he predicts.

And Grewal wants his company’s motors to power them.

ePropelled, a company specializing in electromagnetic propulsion motors, announced its opening in Lowell’s Boott Mills last week. It’s a step in what Grewal, president and CEO, called the “electrification of the planet.”

Each motor is designed for efficiency, said Nabeel Shirazee, the global chief technology officer, who has worked on the technology for decades and developed seven patents. The motors are smaller and less than a third the weight of most other comparable motors, Shirazee explained. Plus, ePropelled claims its motors are about 25% more efficient.

The circular air motors range in size from slightly less than 4 inches in diameter to slightly more than 7 inches. Each is lined along the outer edge with rareearth magnets, which are strong magnets made from rare- earth metals. Fins on the spinning wheel allow for constant air circulation to cool the motor — one example of its efficiency, Shirazee explained.

The company is currently focusing its products on three markets: aviation and aerospace; electric vehicles; and water pumps. Only air motors are for sale currently, but Grewal expects pump motors and vehicle motors to roll out in March and August, respectively.

Price varies by type of motor and size.

Since the company got its start about a year ago, it has grown from four to about 40 employees, with international offices in Wales and India. So far, it has produced a couple hundred motors at its base in Lowell.

By the middle of next year, Grewal expects to produce motors at a much higher volume, and perhaps expand to a larger manufacturing space in Lowell.

“ It’s great to be in a 100- yearold building, where innovation happened 100 years ago,” Grewal said of the company’s space at the Boott Mills.

ePropelled currently serves three companies in Massachusetts that are working on developing flying cars, Grewal said, though he declined to name the companies.

At a ribbon- cutting for the business last week, state Rep. Thomas Golden said, “ Lowell was part of the American Revolution in industry. ... And we’re going to be part of the revolution of companies like ePropelled coming to Lowell.”

At the ribbon- cutting, ePropelled also received a letter of recognition from the Massachusetts House of Representatives.

“ This is our future,” said Mayor William Samaras, who was also in attendance.

“ We’re a natural environment for the development of these types of companies.”

Grewal added, “ The world is about to change once again.” 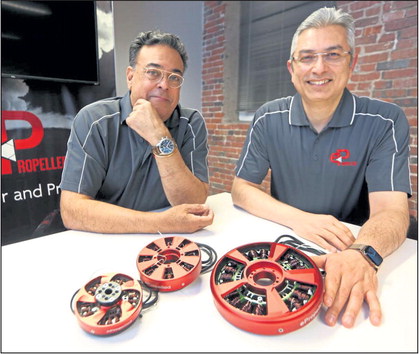 Nick Grewal, left, of Sanbornton, N.H., is the president and CEO of ePropelled, which has opened a manufacturing space in Lowell’s Boott Mills. At right is Nabeel Shirazee of Wales, the company’s global chief technology officer.