FOR HALF A CENTURY, TAKING CARE TO NEXT LEVEL

LOWELL » “ My first impression of everyone I encountered was, ‘ We care.’” That’s how Caroline Duong remembers her first experience at Lowell Community Health Center, when she sought care while pregnant with her 6-yearold son, Eliab.

It’s an experience that’s continued since, and part of why she joined the center’s board of directors in July following a recommendation from her primary care physician, Dr. Donald Miller.

Duong, a Kenyan immigrant whose husband, Thomas, is of Vietnamese and Cambodian descent, felt she had a perspective that she could contribute to help other patients.

She’s among the more than half of the board members who are consumers of LCHC, and have an active voice in guiding 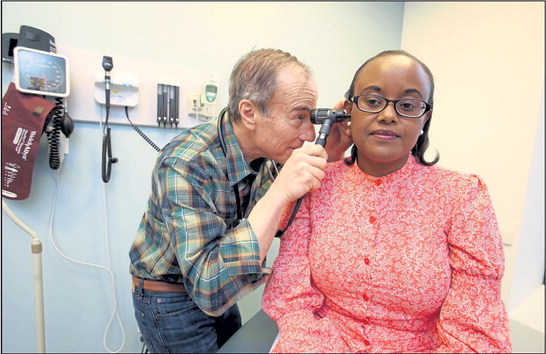 Community health centers like LCHC are driven by community empowerment, engagement and meeting community needs in the face of changing circumstances in health care delivery, insurance, state and national policy and other forces at play, said CEO Susan West Levine.

“At our core, for the last 50 years, we have made sure that this health center has been here to address the specific and unique needs of our community, regardless and in response to all of those forces,” West Levine said, reflecting on LCHC’s 50th anniversary. “And we will continue to do that for the next 50 years.”

LCHC accepts private and public insurance and does not turn away anyone who is uninsured or unable to pay, offering a sliding scale based on income and family size.

The health center is a one-stop shop for primary care, behavioral health, supportive services and more, serving about 35,000 patients annually in Greater Lowell.

“ Most of what happens when it comes to your health happens outside of the exam room,” Gunther said. “ Our community health workers will go to someone’s home and maybe do an asthma assessment or see if there’s mold. Maybe look in the fridge and notice that there’s no food and then we try to address those problems as well. So it goes beyond getting a shot or getting an exam.”

The center will help patients with such items as clothes, diapers and feminine hygiene products, connect them with benefits like WIC and refer them to other agencies to help fill other needs they may have.

The first community health centers in the country opened in 1965 in South Boston and rural Mississippi, born out of the social justice movement.

It quickly spread to Lowell, when Lowell General Hospital established a community- based health clinic in 1970 that would later evolve into Lowell Community Health Center. Recognizing the difficulty of many of the city’s poorer residents to access health care, the first clinic opened in an apartment at the former Shaughnessy Terrace public housing complex, offering prenatal, pediatric and basic dental care.

Throughout the 1970s additional clinics opened in neighborhoods around the city, staffed by LGH providers and supported by the outreach efforts of residents and Lowell Visiting Nurses.

LCHC opened its office and clinic space at 597 Merrimack St. in 1984, and became an independent nonprofit. With a majority of board of directors patients of LCHC, it gained status as a Federally Qualified Health Center and began receiving federal funding in 1986. It also qualified for federal malpractice insurance, allowing the center to deliver care in a more cost-effective manner, West Levine said.

Every few years, the center must conduct a federally- mandated community needs assessment to ensure that its programs and services reflect the needs of the community it serves, West Levine said. LGH, UMass Lowell and the Greater Lowell Health Alliance aid LCHC in conducting the assessment, and the findings inform how the center delivers its care, she said.

Some changes prompted by the assessments over the years include the addition of vision and dental care, expanded medical interpretation services in 61 languages, expanded hours of operation on Saturdays, transportation for individuals with substance use disorder to detox programs, and most recently, the creation of a special diabetes clinic.

By the 1990s, the center nearly doubled its patients to about 11,000 per year. It expanded to adjacent space at 585 Merrimack St., and launched Cariño, its HIV/AIDS department. In 1995, the Lowell Teen Coalition – which would later evolve into Teen BLOCK ( Building Leadership Opportunity Community Knowledge) held the first Dance 4 Peace, focused on issues connected to violence prevention, that continues to be held annually.

By 2000, LCHC’s patient base grew to about 15,000, and the center expanded to a new location at 17 Warren St. It also marked the beginning of LCHC’s Metta Health Center, at 135 Jackson St., designed to meet the needs of the city’s Southeast Asian population, including a large number of Cambodian refugees who fled the brutality of the Khmer Rouge in the 1980s.

“ Then- CEO Dorcas Grigg-Saito in this time period was recognizing that our new community members from that part of the world were not accessing services here at the health center,” West Levine said.

Upon meeting with community members, they realized the refugees found the institutional nature of the Western health care system intimidating, and set about finding a way to remove that barrier.

Metta, named for a Buddhist phrase meaning “ loving kindness,” was one of the nation’s first fully integrated health centers with both Eastern and Western healing practices, delivering care in a manner consistent with the customs, values and traditions of the population it serves.

In 2002, LCHC launched its first school- based services in Lowell Public Schools, which are today available at Stoklosa Middle School and Lowell High School. The program allows students to access full primary care right inside their schools, breaking down barriers they may otherwise have to health care.

It was one of only 85 health centers around the country to be awarded federal stimulus funding – about $ 9 million – for the project. The community also showed its support, contributing $ 5 million to the $ 45.2 million first- phase first phase and $ 3 million to the $ 25.6 million second phase, Gunther said.

That support has continued since, in a number of ways.

The building is filled with original artwork by area artists through the ArtUp program. When pieces are sold, half of the proceeds go to the artist and the other half to LCHC’s annual fund.

Miller, who is one of about 500 employees at LCHC, said he’s raised nearly $ 700,000 for the center, and he hopes to keep that number rising when he retires from his 30- plus- year career in family medicine next month.

He said he left private practice about a decade ago to work at LCHC because he felt its mission was in line with his values.

“ If your motivation for going into medicine is that you want to have close contact with humani-ty, and to have the opportunity to take care of an underserved population, it can’t possibly be better,” Miller said.

In his time at LCHC, he survived bladder cancer and is now facing Parkinson’s disease. He said LCHC has supported him, making accommodations that allowed him to keep caring for his patients and contribute his knowledge and expertise at the administrative level.

Lisa Sousa, a resource specialist and certified Portuguese interpreter, said the personal touch has kept her working there 14 years. 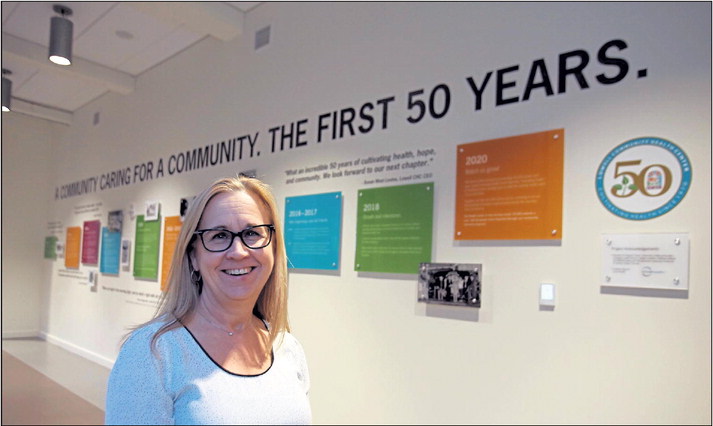 CEO Sue Levine, of Maynard, stands in front of a timeline of Lowell Community Health Center history in the main corridor. 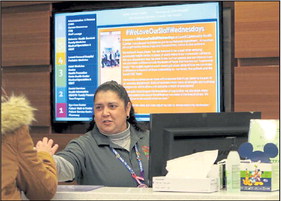 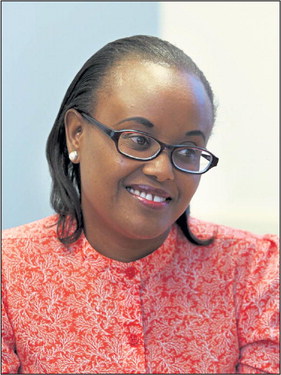 Patient Caroline Duong of Lowell was struck by how much staff at the center show they care. 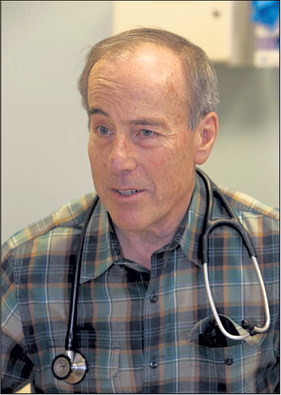