LOWELL — With important decisions on the horizon, from selecting the next superintendent to implementing a plan to bring diversity to the district’s hiring, the Lowell Public Schools have no shortage of challenging choices to make in the coming months and years.

But before they make them, families want a say.

That’s how about 25 parents and others ended up talking, brainstorming and taking notes in the basement of the Cardinal O’Connell School last week.

“As a parent, you want to be involved with kids,” said Abisola Ogunseye, who has four children from preschool to high school enrolled in Lowell Public Schools.

These parents and other community members are involved in the recently-revived Citywide Parent Council, now known as the Citywide Family Council. Dormant for years, the new council and name — a change made for inclusiveness — was rolled out at a kickoff event this September.

Beth Tripathi, part of the council’s leadership and the mother of a 3year-old and a 5-year-old, sees the council as a formal way to channel parent concerns to the School Committee.

Indeed, through meeting motions, School Committee member Jackie Doherty has pushed for administrators to attend the monthly meetings. Years ago, Doherty got her start in the district through the group’s earlier incarnation.

Last week, Acting Superintendent Jeannine Durkin headed over to sit with one of the small groups at the Citywide Family Council meeting.

“I’m going to listen and learn,” she said.

COUNCIL/ From Page 3 and Phala Chea, the English language learner coordinator, circulated throughout the room.

Katerynne Patino, the parent liaison for Stoklosa Middle School, joined a table discussing a topic high on the list of many involved in the group: communication, particularly between the district and families.

“I don’t know how I would be aware of any of those programs,” Patino said at one point.

The sentiment was echoed by others in the room and leaders of the new group.

“I believe (communication) needs to be built up,” said Tripathi. “There are a lot of groups moving in the same direction, but they’re not always in communication with each other.”

Information on things like after school activity schedules, extra-curriculars and school registration can get lost in the mix, she said. This is especially true for parents that aren’t English speakers, according to Evan Caverly, an 18-yearold graduate of Lowell High School, who is also involved in activist group Lowell Education Justice Alliance.

According to the Department of Elementary and Secondary Education, about 29 percent of students report a first language other than English.

The council, Caverly said, offers a way to voice concerns and advocate for change on a level playing field.

“I really like the dynamic of the meeting, because its really inclusive,” he said. One of the group’s early initiatives starts with the basics. A sub-group is creating a pamphlet mapping how the district is structured, listing information from who to contact to call your child out sick to who to reach for larger issues.

With sharpies and poster-sized paper, community members discussed next steps at the January meeting. One member suggested an increased social media presence, such as a Facebook page for the Citywide Family Council, which could gather many different announcements in one place.

Tooch Van had another topic on his mind: diversity.

Van has two adopted daughters attending Lowell High School and works for the Cambodian Mutal Assistance Association, though he said his employment is separate from his involvement in the council.

Van and others said they are tired of the district’s lack of progress in bringing diversity to the district.

Lowell has the second largest Cambodian population in the United States, Van said, but how many Cambodian teachers or staff does the district employ?

“I really want to bring diversity to Lowell Public Schools,” he said. “Not only lip service. ... Diversity should be acted upon.”

Filling the open human resource director position with someone who can find candidates from an array of backgrounds has been a rallying cry among parents and others at School Committee meetings in past months.

For almost a year, the district has operated without a permanent person in this position, following a request by the former director Anne Sheehy to transfer back to the classroom. In the months since, the district has released the results of a human resources audit, which found a need for a smoother hiring process, a more diverse staff and increased transparency. A workforce report showed 91 percent of teachers in the district were white while nearly 70 percent of the district’s students were non-white.

“Diversity is a huge one,” Tripathi said. “That’s come up over and over again from the parents.”

Parents say a more diverse staff would not only demonstrate to students of color that they can go into teaching, but also bring more bilingual staff members to a district, which struggles with communication.

Van, though not confident, is hopeful the Citywide Family Council will be able to push the district or School Committee to act on the issue. However, the HR director is only one position. At the highest levels, almost all the district’s positions are either empty or have someone serving on a temporary basis. This includes the superintendent position, following an announcement by Durkin last week that she will not pursue an appointment to the permanent position.

The upcoming superintendent search was discussed at the Citywide Family Council meeting last week. Parents were encouraged to attend a personnel subcommittee meeting of the School Committee on Monday about the search.

The reboot of the Citywide Family Council is being led by by Project LEARN and Working Cities Lowell. Organizers at Project LEARN said a 3year grant is funding these early efforts, but eventually they hope the Citywide Family Council will be entirely parent led. LZ Nunn, the executive director of Project LEARN, said families attending the meeting have also addressed other issues like the district’s budget crisis and the Lowell High School building project.

Meetings include child care and translation services, though those seeking translation for languages other than Spanish and Khmer should ask ahead, she said. “We’ve had a lot of really positive responses,” Nunn said. 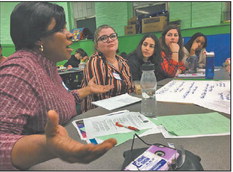