A (chicken) wing and a prayer

LOWELL » While serving 21 years in prison, Sing Thanousith perfected his Kamakazi sauce. Day after day, he stirred new ingredients into the sauce and served it with wings to other inmates. Sometimes, appropriately, he would sing while he worked.

The taste is nothing like Buffalo sauce, he said. And nothing like barbecue, either. Thanousith calls it a “ remix” of old and new flavors. When inmates first tried the wings, they said, “ This chicken is the bomb,” he recalled — hence the name Kamakazi.

Thanousith’s face lights up when he talks about his sauce. He was inspired, in part, by home cooking he ate while growing up in Laos.

He said the sauce will “ take you out of this world.”

Now Thanousith hopes to find freedom in his wings, in what he says is his “ new beginning.”

The Lowell resident was convicted over 20 years ago in relation to a robbery, and served time at the Massachusetts Correctional Institution in Norfolk. When he was released last year, he joined Thrive, a Lowell-based 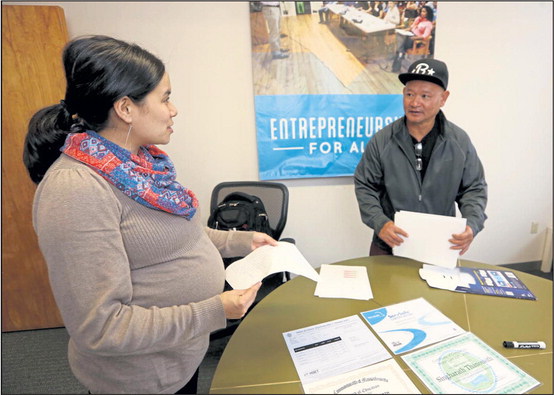 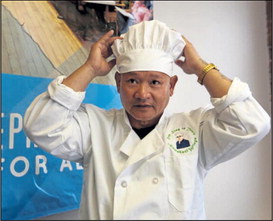 From there, Thanousith connected with the nonprofit Entrepreneurship for All to brainstorm a plan for a food truck, which he’ll call Hop Sing in Town. After this year’s Summer Accelerator, EforAll granted Thanousith $ 1,500 in two awards to launch his business.

While working with EforAll, he noticed a need: professionals in a growing city in search of a quick bite during break.

At first, the wings will be the solo menu item. He’ll plate them with white rice and bok choy, then garnish the dish with scallions. Eventually, though, he may expand to steak or ribs.

“ I would like to show people that Kamakazi sauce — my sauce — can go with anything,” he said.

While nothing is set in stone yet, Thanousith wants to park the truck downtown, potentially in the area of Mill No. 5. He is currently filing paperwork to get his business off the ground.

Down the road, Thanousith dreams of opening his own restaurant spotlighting his Kamakazi sauce. But for now, his focus is on the food truck, which he named after the chef character, Hop Sing, from the American western television series, “ Bonanza.”

Thanousith’s mantra is “A thousand- mile journey starts with the first step.”

That is Thanousith’s mantra. And he’s living up to it, step by step. He studied for 2 ½ years to earn his GED and also became ServSafe-certified. Starting over after his release from prison has been a challenge, he admitted.

Once his business launches, he hopes to hire others in similar circumstances to help them start a “new life and try to do the right thing.”

“ In the end, we all live to learn and we all learn how to live,” adding that it’s “ never too late to change.”

Thanousith hopes others will learn from his lesson.

“ Don’t give up your life,” he tells young adults.

“ I’m really thankful every day to wake up, walk around ... see the birds singing,” he said. “ Enjoy every moment of it.”